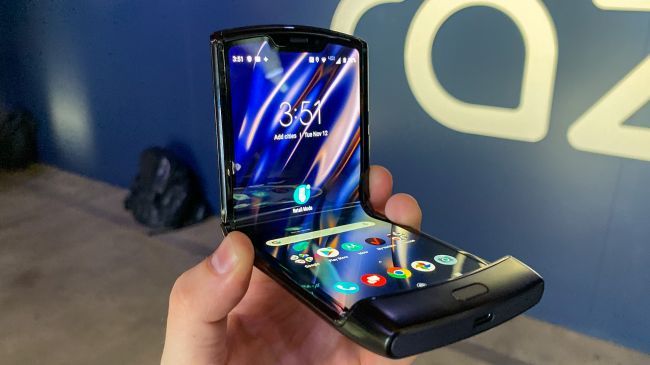 The Motorola Razr 2019 is a cutting-edge foldable phone that’s also a throwback to one of the most iconic phone designs of all time: the original Razr V3 that launched in 2004… it’s the future wrapped in the past. But is this synthesis novel enough to make an impact on the market?

It makes sense that Motorola would drape its most ambitious experiment in its most historically popular design: the company’s mid-range and budget smartphones are lauded for their utility and value, but not their flash. The Moto Z4 looks largely unchanged from the original Moto Z, while the Moto G7 line is effectively a pared-down version of the Z line for the shallow-pocketed. Even the new Motorola One line barely strays from the rest of the company’s designs.

The Razr 2019 is a chance to break the mold, and at the same time challenge the industry’s assumptions about what the smartphone future could look like. We assumed that foldables would bridge the gap between phones and tablets by unfolding horizontally into a wider display; Motorola’s take has other ideas, and flips open to reveal an elongated touchscreen, one that’s just a bit longer than the iPhone 11 display.

So no, you don’t get much more screen real estate. The novelty lies in what you can do with it closed, as there’s a smaller display on the outside for checking texts, calls, music, emails, and such – much like the preview you’d get on a smartwatch. Below that quick-look screen is the rear camera, which when the Razr is closed becomes a selfie camera, while the small display shows what it’s looking at.

The Razr 2019 can be handled with one hand when flipped open (as much as any plus-sized smartphone can), but more importantly, when clamped shut it fits in your palm – and your pocket.

That small footprint is what makes the Razr special – you’re essentially pulling out an enlarged pager when you want to check notifications or glance at the time, which is much easier than tugging a smartphone out of your pocket or bag dozens of times a day. And there’s no denying that flipping a phone open and snapping it closed (say, to hang up on a call) is just as fun today as it was in the original Razr’s heyday.

The new Razr can, and will, turn heads, and it is, undeniably, enjoyable to use; but it’s also expensive, costing three times the launch price of the Moto Z4. That price tag reflects the technical challenges involved in making a flip phone work smoothly in 2019, and the inclusion of unconventional parts that you won’t find in conventional smartphones.

Boring is cheap. If you want to be on the edge of style but not specs, the Razr is worth checking out – and at least you won’t have to pay as much as you would for, say, the Samsung Galaxy Foldto experience this markedly different approach to foldables.

We don’t know when you’ll be able to pre-order the Razr 2019 in the UK – Motorola has said preorders will open in some European countries in December – but we do know that it’ll be exclusively available on EE. Motorola has also said the phone will be released in Latin America, Asia, and Australia at some point.

Motorola is well aware of the troubled releases of other foldable phones, and in a statement, the company noted:

“We have full confidence in the durability of the Flex View display, and based on our research, it will last for the average lifespan of a smartphone. We acknowledge this is a brand new technology and we are committed to continue improving as the industry evolves. Therefore, we’ve created a world class service package to make sure every Razr customer has an exceptional experience.”

That includes 24/7 chat support or 14-hour-per-day direct access to customer service, and should the device or display fail, Motorola guarantees 24-hour turnaround to exchange it. Should defects occur during normal use, Motorola will repair or replace the device free of charge. For anything outside warranty – which lasts one year in the US – the device’s display can be swapped out for $299.